The goal here is to extend the power range of an otherwise simple and lightweight bicycle. The solar trike is too awkward for many practical trips. It's great on the trail but awful in intersections. I took the brush wheel motor from the trike and rigged a 24-volt system with 4 8.5 amp-hour six-volt SLA's on another frame similar to the original E-bike. I put the batteries in the front basket and kept wires short.

The three switches working towards the front of the basket are SPST motor off/on, SPDT run/regen-, and SPDT run/regen+. The two SPDT's are used together like a DPDT to dump motor generation into any 6-volt battery selected round robin with a pair of clip leads. They also can be flipped separately to direct 12 or 18 volts to the motor as additional "speeds". Being lighter than the tricycle, there is plenty of pep with the 24-volts directly applied to the motor (no PWM throttle).

Unlike the 3-phase motor, this one will start from 0 but the current draw is over 25 amperes and s/b avoided. This bike is to be as simple and light as possible so even the PWM throttle was left behind. The 4 SLA's perform well as a 24-volt source but they are heavy and the 6-volt regeneration can be improved upon. I obtained Li Ion cells in the 18650 form factor which are the same type used in the Tesla Roadster.

Shrink wrapped packs as they came.

They will be arranged in two 24-volt 8.8 amp-hour banks each containing 6 parallel packs of 4 cells. This should insure having sufficient power for the return from any trip. The packs can be safely charged to 4.0 volts according to this excellent reference and total regeneration will be increased.

Mounted as six packs for 24 volts.

The batteries arrived with a half charge at about 3.88 volts per cell. Each book has 6 4-parallel-cell packs wired in series for a nominal 24 volts. At half charge, this is about 23.3. Fully charged batteries would be about 4.2 volts/cell or 25.2 for the book. There is a hefty capacity loss (about 20%) by limiting the cell voltage to 4.0 but the return will be greater safety, simpler charging, and less concern with outdoor temperature effects. The essentials of charging these are constant current up to a point, then constant voltage to maintain but never exceed the final voltage.

Jacks to every junction.

Closing the assembly very, very carefully and working out doors.

This is the same type of battery used in recent laptop computers and having some of the same hazards that the recalled computers did. These batteries, when fully charged, are a tenth of a volt away from a complete meltdown. The jack arrangement allows the motor to switch into the full 24 volts at the double jacks at each end. The jacks in between allow round-robin charging of each parallel pack during renerative braking. 4-volt regeneration begins at walking speed.

What will still be needed is a voltage monitor to shut it off when voltage exceeds the pre-set charge limit. The rectifier and capacitor are light enough to keep with the bike at all times, allowing plug-in anywhere.

1/22/2008 - I took the bike on a multi-purpose errand reaching the farthest destination at 12 miles. It was 60 degrees F and each powerbook voltage was 25.16 volts. Leaving at 9:20 and arriving at the final destination at 11:40 consumed 140 minutes. Allowing 22 minutes for one stop and 29 for another means 89 minutes were needed to cover the 12 miles at about 8 mph average speed. There were also several dozen street-crossing stops, each requiring a pedal boost to walking speed. When I left to see if I could go a bit farther on the 1st powerbook, it was dead with 17.95 volts or about 3v/cell. I also noted two things. My rear tire was soft and my regenerative braking jumpers were backwards. During about a dozen substantial regen opportunities, I simply discharged the batteries further! It seemed to really brake "hard" when I did it, tho! I switched the powerbooks, reversed the regen leads, pumped the tire, and returned home a slightly different way with more stops and covered the 12 miles in 85 minutes, again at about 8 mph average. The 2nd powerbook was not quite as dead and had a terminal voltage of 19.58, or about 3.26 v/cell. Pedal assist was only to start motion from a dead stop and deal with infrequent steep inclines.

I hooked up both in series for recharging and monitored cell voltages, noting the following anomalies: The "abused" powerbook (on the way out with the reversed regen) had uniform cell voltages of about 3v/cell. The other had variations from 2.9 to 3.5! After about five minutes charging at 1.24 amperes, the cells evened out. After about 3 hours the cells were back to their initial half-charge state of 3.88 v/cell. The voltage rises quickly then asymtotically takes more time to rise further. 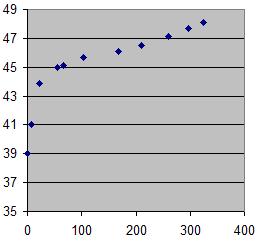 Scope amp probe AC and DC side of rectifier 1.74 amp/vdiv and 2ms/hdiv